Gloucester City Government - It's Politicians, Past and Present 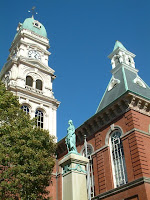 In my book, An Island No More, I talk about Gloucester being like no other place. Our government and our politicians have in the past and in some ways carry on this unique public image. I’ve been an interested observer of local politics for over 50 years and we’ve had our share of different, sometimes whacky, political candidates.

John P. Canavan, a city council hopeful in the late ‘40s campaigned on a platform of hot topping the harbor as his solution to the scarcity of downtown parking. Then there was the declared dark horse in 1967’s runoff, who actually rode a horse into Kelleher’s Bar during the election eve buffet. We had a junkman by trade, who campaigned unsuccessfully several times, increasing his vote count as he gained oratory experience. He also wrote eloquently in the Times. It was rumored at the time that he enlisted the services of a ghost writer. It turned out the mystery pen belonged to a local coal and lumber czar. Who could forget John J. Burke, Esq., one of our most colorful mayors in the early ‘50s, a pleasant change from the honorable “straight-laced” Weston U. Friend? Of course, all of the above were part of a different era; looking back, post WW II politics were innocent years.

Things didn’t seem as serious in the ‘40s and ‘50s. Life in Gloucester was positively exciting, our fishing fleet was growing by leaps and bounds, and our families were prosperous. Life was great for our blue collar community that turned into a tourist artist mecca in those carefree summers so long ago.

In many ways, as Gloucester moved forward in the 1950s, our fishing industry experienced a gradual decline over the next several decades, bringing us to the present day. We now live in different times, having experienced basic economic changes. We continue to adjust and rise to the challenges that these lifestyle changes impose upon us.

For starters, the modern day complexities of municipal governing require a reexamining of our present government and how we go about delivering our municipal services. As a life long observer, I feel the time is now, perhaps long overdue, to reexamine the City Manager form of government in earnest. We have city manager experience and we made some poor choices in the past; let’s revisit the city manager form of government.

I personally feel that our mayoral form of government went out with high button shoes! If we are to continue our present form of government, I feel the mayor’s term should be increased to four years and no more than two consecutive terms. As it presently stands, a new mayor barely arrives in city hall when she finds herself having to mount a reelection bid only months into her first two-year administration. These short two year terms and reelection campaigns, coupled with the lack of term limit restrictions on incumbents, are expensive to conduct and play into the hands of municipal unions. All politicians seeking reelection must bow to these voting groups. This is a no-win situation for the general taxpayer, rightfully expecting improvement and efficiency in the cost of government administration. This is exactly the position Gloucester finds itself in today.

Politicians in the past have given our city away in better economic times and now find that these cushy employee union negotiated contractual benefits are realistically no longer affordable. These freely given cumulative benefits are seen as bargaining chips agreed to by incumbents as a means of perpetuating their own political longevity. The chickens have come home to roost....the gravy train has stopped! Terms limits address this issue!

All city councilors should run “at large”. The “Ward Councilor” title should be relegated to the trash heap! Ward candidates are not required to compete city wide. They only have to convince a narrow segment of the city’s entire voter population. In this limited voter constituency, the incumbent, often unchallenged, walks in avoiding the scrutiny of our entire voting community. While the premise for this ward representation is to deliver neighborhood services by their ward designated councilor, that councilor, who only catered to a ward constituency, then gets to vote on matters affecting the entire city! To me, this doesn’t ad up. All councilors should be governed by term limit restrictions and serve only two consecutive terms, i.e., eight years.... AT LARGE.

Our present form of city government needs to be revamped. Our executive branch, mayor and assistants, et al appears to be bogged down in the daily minutia, the nuts and bolts of administrating our budget. These duties should be delegated to a professional manager, leaving the mayor and inner staff to focus totally on issues of attracting new business development, increasing our tax base and generally moving our beautiful city forward.

In keeping with the above, I am reminded of a former city council that came to be known as the “Reform Council”, circa 1968. My friend from boyhood, Andrew Nickas, was a member of that council, along with Joe Salah and others. Together, they became known for constantly making things happen for Gloucester. That group successfully acquired the St. Peter’s High School (Fuller School) purchased from the Boston Archdiocese at a bargain price. They successfully opened up the formally landlocked Blackburn Industrial Park, negotiating with the state for an access road off Route 128. The Reform Council was always moving. It seemed that every week there was a new announcement, bringing meaningful economic change to Gloucester. They were not interested in their own longevity, only striving for the community’s overall better quality of life!