At the Planning Board meeting on Monday, March 12, 2012, after delivering my remarks, I presented the board with a "Rezone the Fort, Save Gloucester", citizen" petition
containing 328 names of fellow Gloucester citizens.

These signatures were collected at the Post Office entrance and during several cold stints at Market Basket, Gloucester Crossing, a week prior to the meeting. While this petition and an online version containing over 500 signers, and still counting, represents a cross section of our community's five wards and is impressive by its very number; to me, there's another side to this story, even more laudatory.

Every signer of my petititon came with a positive comment and I quote: "It's about time"; "It's
long overdue"; "We need to open neighborhood fire stations"; "My son bought his first house, he needs tax help"; "Gloucester needs this downtown hotel"; "Clean up the Fort"; etc.

The positive eager responses and feedback to this petition is running 20 - 1 in favor of this hotel development. I found these verbal responses even more impressive and inspirational than the
actual number of signatures collected. As Paul Harvey would say, "AND THAT'S THE REST OF THE STORY."

published March 12, 2012
Despite the opposition’s ongoing spin citing the Fort’s recent marine industrial
rejuvenation, the cold, hard facts remain that this marine industrial zone dramatically
mirrors the demise of the local fishing industry as we once knew it.
From Beach Court along Commercial Street, around Fort Square to Parisi’s harbor front
(formerly Mariners-O’Donnell-Usen) prop., there has been no waterfront generated investment
of any magnitude in 50 years.
These undeveloped prime waterfront properties, including Amero’s (Cape Ann Fisheries), Curcuru Fresh Fish Wharf and Producer’s Harbor Front property, now owned by the city (taken in 2010 for past due taxes), have not attracted any outside marine related private investment for over five decades!
Where are the opposition’s alleged viable, solid “marine industrial opportunities”? Where
are the water acidification plants and bio labs? Why haven’t these proposed marine science oriented investors knocked on our door years ago?
The fact is, only a few marine related businesses currently operating on Commercial Street in 2012 can actually justify being in this marine industrial zone. Good Harbor Fillet moved to Blackburn Industrial Park years ago and North Atlantic Fish recently sold out; still others could exist away from Harbor Cove. The ice company manufactures ice cubes elsewhere. Its 350-ton daily output is history and it now sells T-shirts and offers tours to stay alive....faced with a recently announced 23% water increase, they are already crying! Ocean Crest and Neptune Harbor, like all remaining fish businesses (despite the positive spin) are struggling along with others I'm told, to fill their fresh fish orders. Neptune Harvest Fertilizer is dependent on a continually diminishing fish waste supply as they anxiously await the latest round of industry quota reductions from on high....NOAA.
Now we have a local investor, Beauport Gloucester, seeking to commit 20 million dollars, removing an obsolete waterfront eyesore and erecting a first class hotel, an improvement for our entire city.
This is a ”cash cow”, waiting with a solid economic remedy, no strings attached!
This is an opportunity that can’t be passed by. THE DAYS OF SAIL ARE OVER!
Posted by Ron Gilson at 8:41 AM No comments: 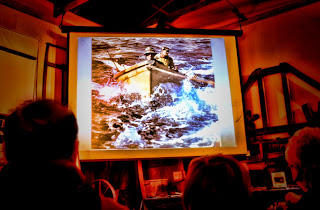 A large crowd was treated to an outstanding talk by Ron Gilson, author of An Island No More, at the Essex Shipbuilding Museum on Wednesday evening. Ron introduced his slide illustrated reminiscence of an eight-day trip on Adventure when he was 17 years old in 1951 with random vignettes of his youth on the wharves of Gloucester Harbor.

Someone once said something like, "We experience life only once--as a child. All the rest is memory." At age 79, Ron brought us back to the days of his youth. With some emotion, he evoked all of the excitement, adventure and sense of awe that many of us feel when we search our own memories of growing up. His respect and love for an era now gone by enveloped the audience and made us all feel privileged to share his experience and memories.
Posted by Ron Gilson at 8:24 AM No comments: